10 Examples of Businesses capitalizing on the Pokémon Craze.

Brand Development / 10 Examples of Businesses capitalizing on the Pokémon Craze.

If you haven’t experienced the Pokémon GO craze first-hand yet, we can almost guarantee your life has been touched by one of the estimated 7.5 million aspiring Pokémasters who are stumbling around neighborhoods, parks and malls on the hunt for imaginary creatures.

We’ve heard and read about hundreds of businesses throughout the country taking full advantage of this app to bring foot traffic into their locations. Coffee shops, retail stores, malls, bar crawl organizations—you name it, they’re all bringing in business by embracing this new phenomenon.

Here are our top 10 picks of businesses capitalizing on this opportunity:

Perhaps the first business in Reno to capitalize on the Pokémon craze was the Peppermill, who posted about their Pokéstops and Gyms first thing Monday morning and paid for a lure shortly thereafter. The Facebook Post had over 300 likes and 139 shares. They topped our list because of how immediately they embraced this new technology and became the example for other businesses in Reno. 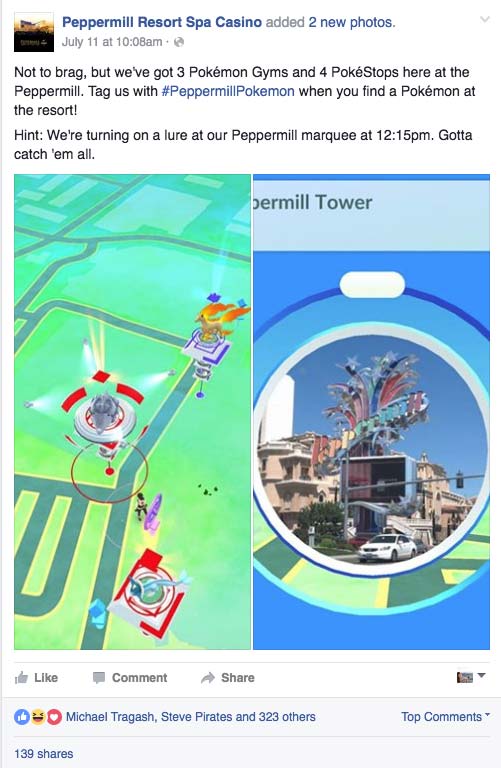 2. The University of Michigan in Ann Arbor, MI

The University of Michigan created a tutorial on what you need to play Pokemon Go and put it in their Snapchat story; in a gif manner they posted multiple snaps in a row to show the essentials until they had a full “kit” for playing Pokemon Go.  They are number two on our list because of their innovative use of Snapchat, while most businesses focused on Facebook and Instagram. 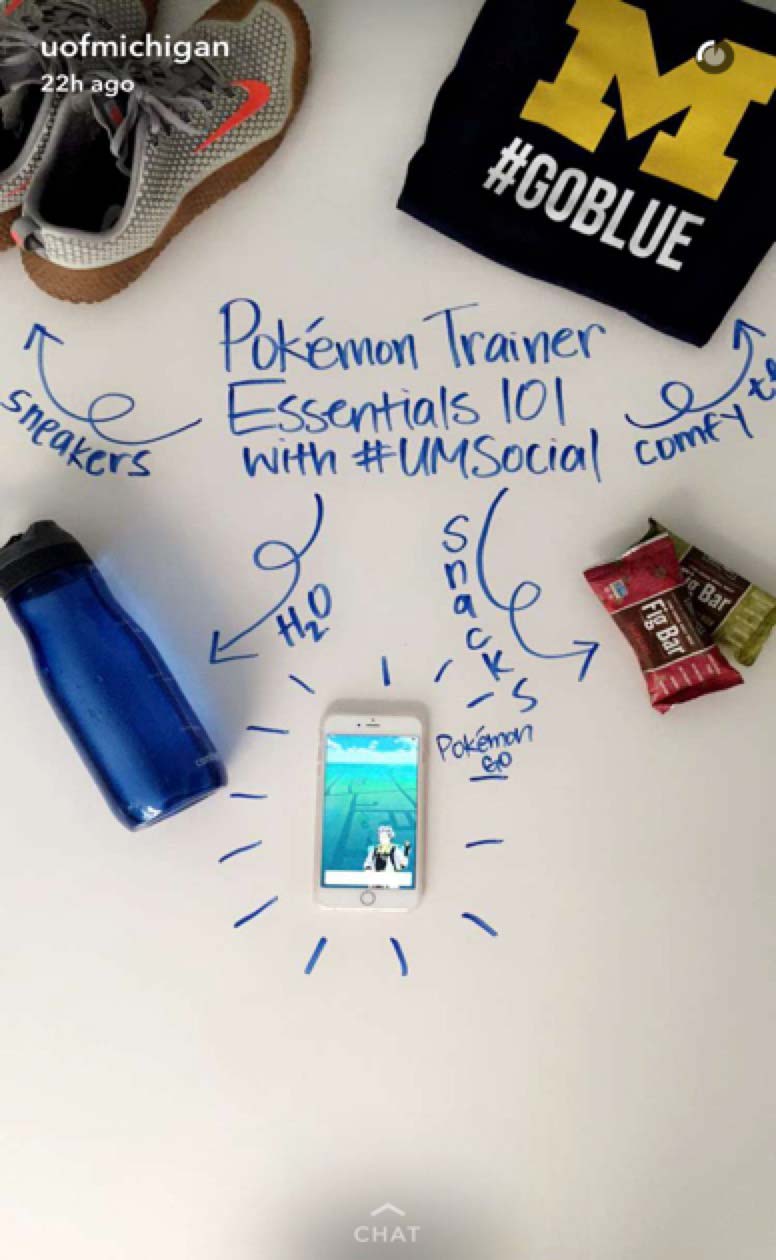 The zoo is hosting a special “SacZoo Pokémon Go Day”.  They are dropping multiple lures at the zoo on that specific day and promoting the Pokéstops and Gyms located at the zoo on Facebook.  They are embracing the phenomenon to drive traffic to the zoo.  Well done. 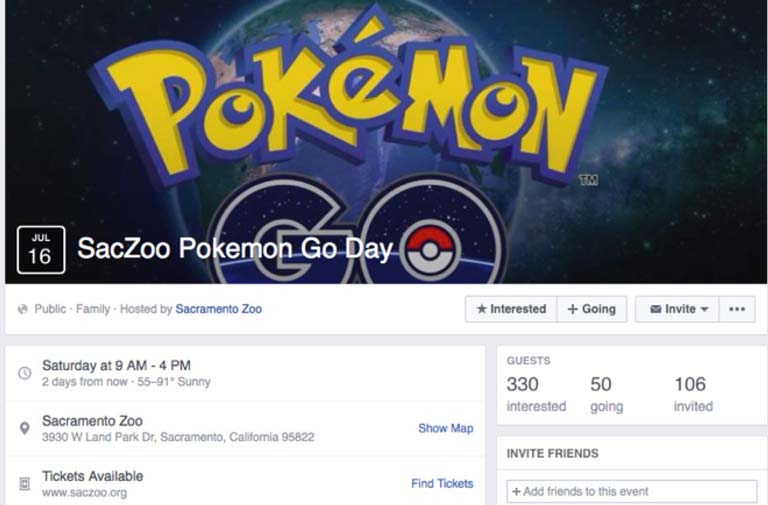 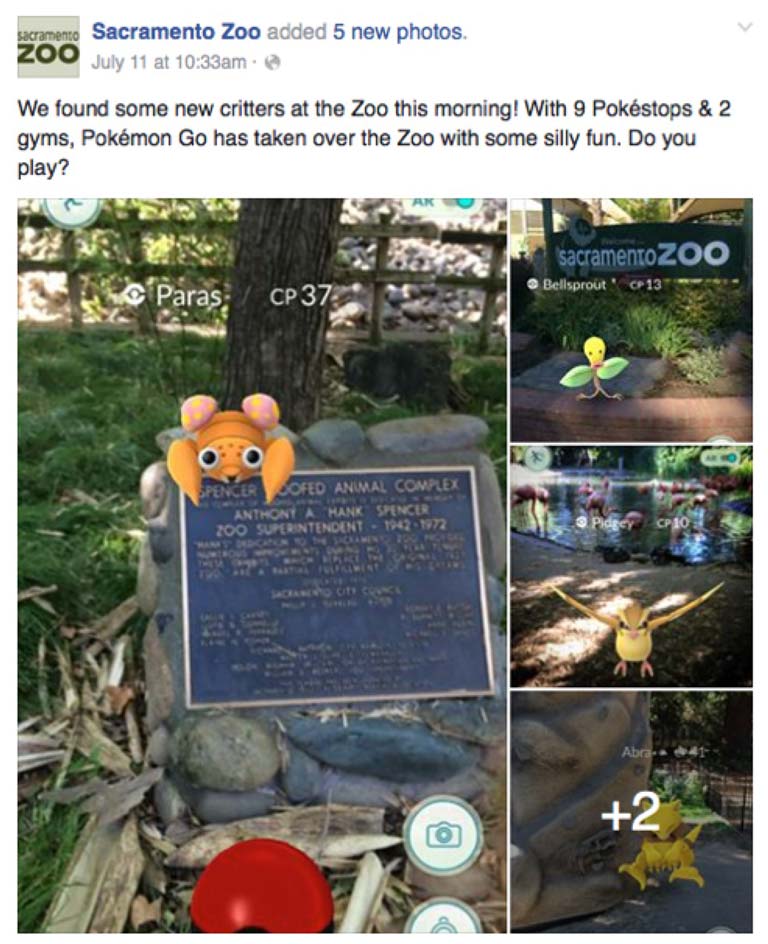 We found this awesome small business story after it was featured in the New York Post.  The short version: the manager of this pizza parlor spent $10 on a lure to draw Pokémon characters to the store and the shops business went up 75%.  Talk about an incredible ROI! 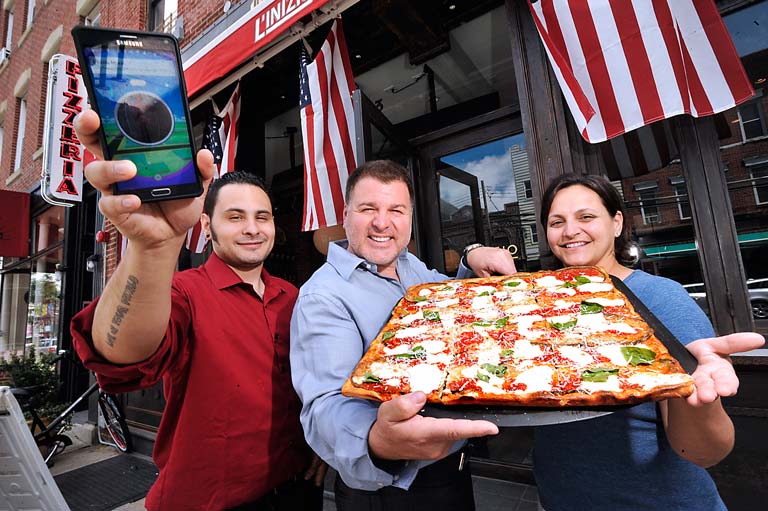 This local coffee shop is offering immediate percentage discounts on food and drinks to players who show the Pokémon app as well as incentivizing Pokémon players to join a Sierra Perks Loyalty Program to receive year long rewards.  They make our list because they not only offered an incentive to make an immediate purchase but were savvy enough to promote a longer term program that could bring back players again, even after the Pokémon craze subsides. 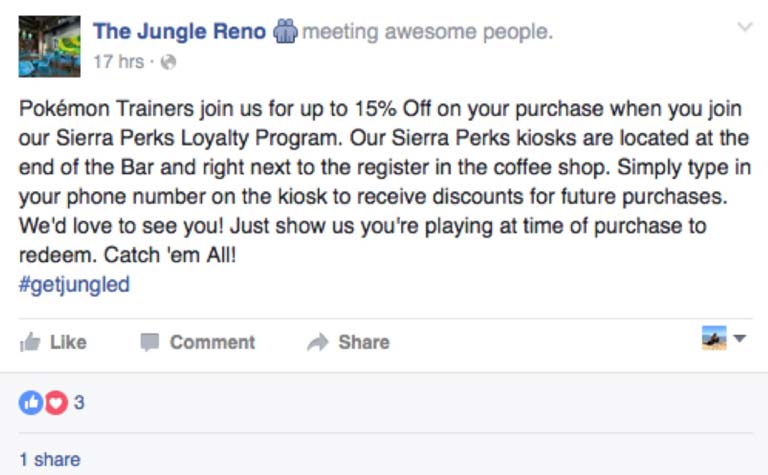 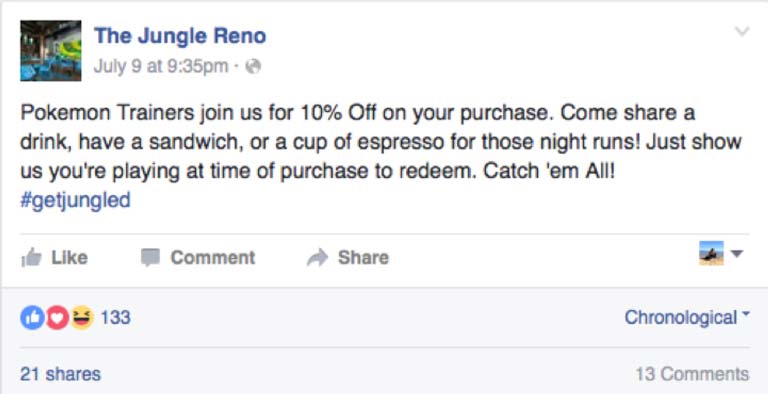 6.  The SweetSpot Bakehouse in Whitewater, WI

This adorable bakehouse was on the trend right away at 8 a.m. on Monday, shortly after the mania began.  They called out their status as a Pokéstop on their sandwich board outside and also designed cookies to look similar to Pokéballs.  Awesome!  (Can you send us some, Sweetspot?) 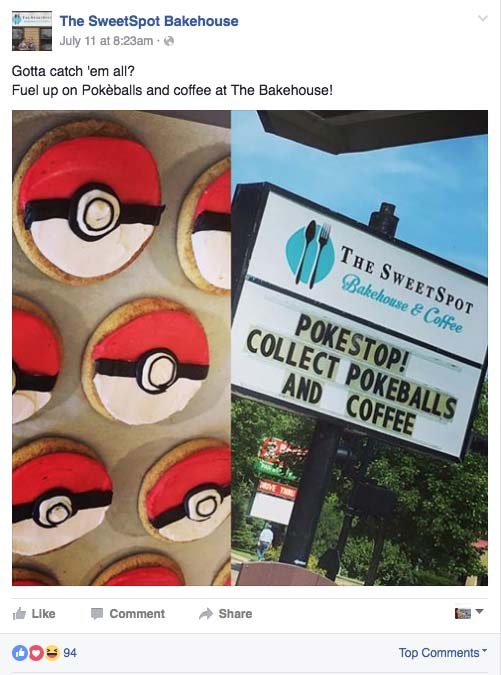 The Reno Aces, a minor league baseball team, are having a Pokémon event at Greater Nevada Field this weekend!  The “catch?” (See what we did there?) Participants are required to have tickets to that evening’s home game – so not only are they promoting Pokémon and giving trainers a special reason to attend, but they are able to directly tie in the promotion to ticket sales.  (We think they’ll probably set up a few lures to make the ticket purchase worth it.) 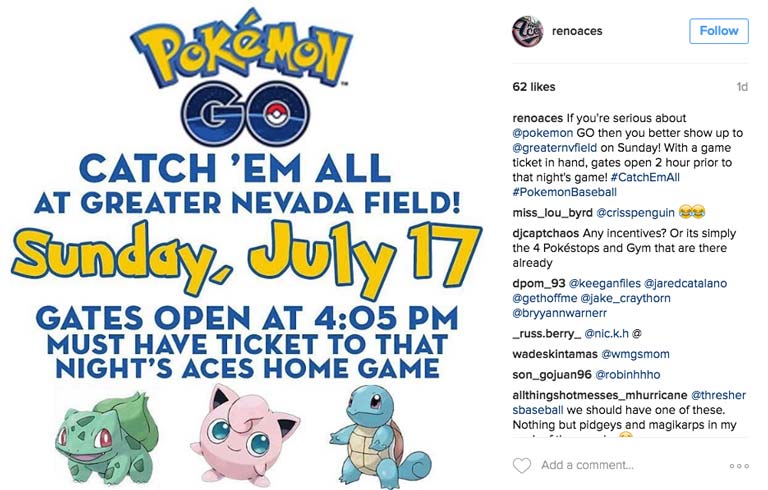 We love this photo from Reno Tahoe USA because it shows how a business can participate in the Pokémon mania meanwhile keeping their brand image and voice the same.  They did a great job of incorporating Krabby (the crab Pokémon in the photo) into a very popular Reno spot. 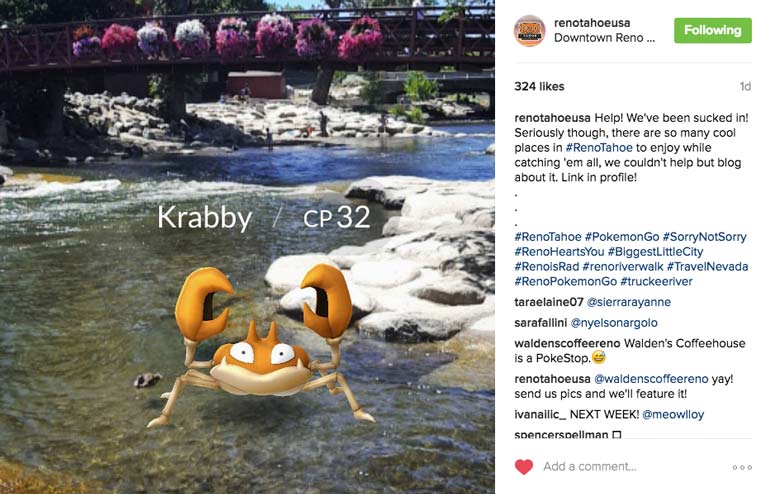 Applebees is interacting with customers on Twitter and retweeting people’s screenshots of Pokémon Go characters being caught in the restaurant. This simple and effective approach shows they’re involved with the digital/mobile world, while attracting business. 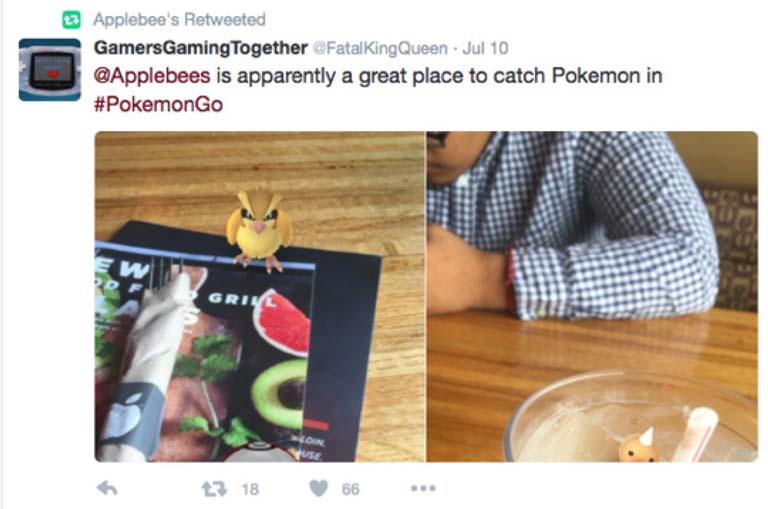 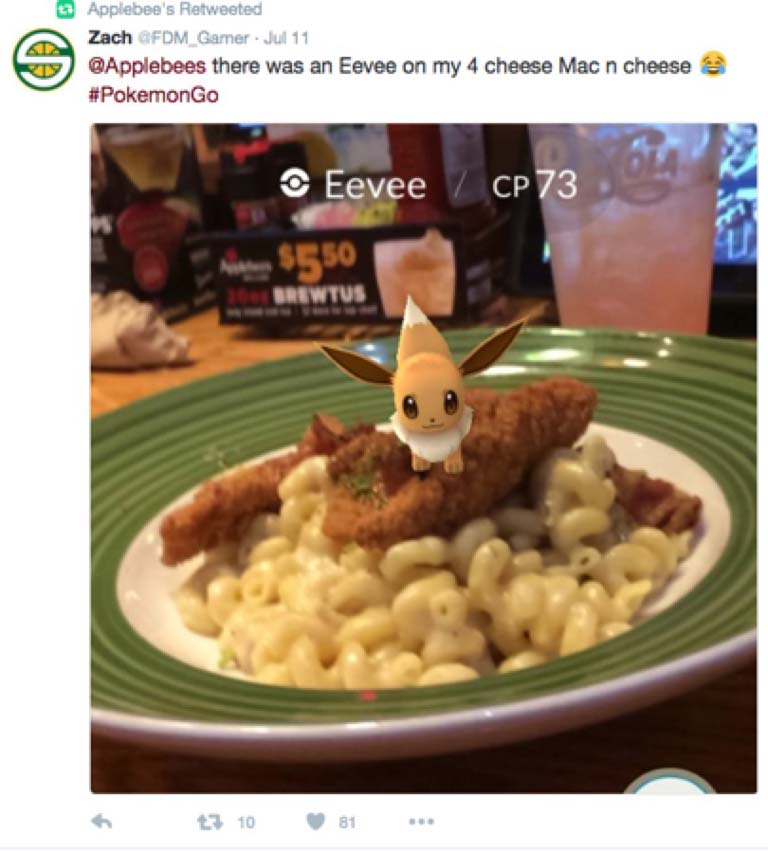 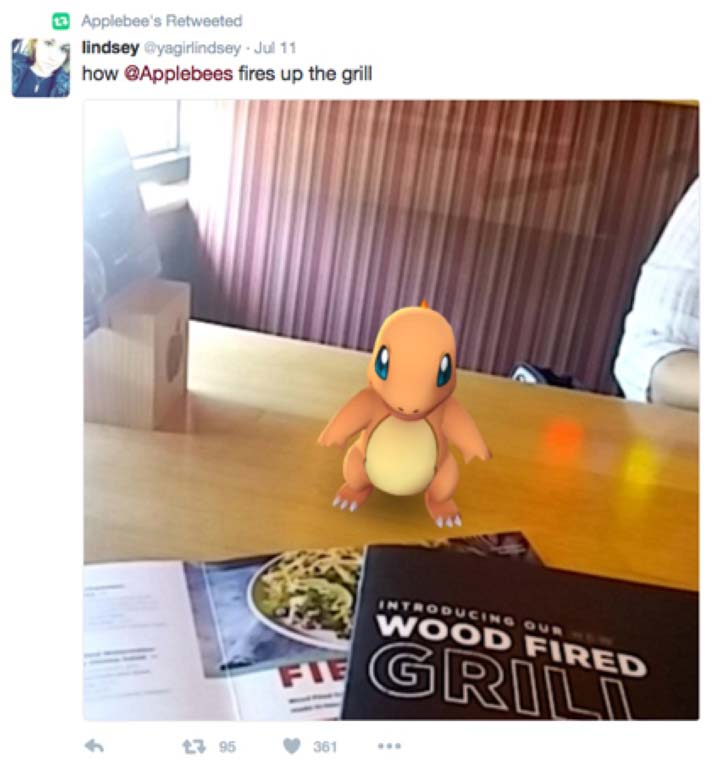 10. Pokémon GO Crawls across the world

Pokémon GO Crawls are popping up all over the country, often lead by small business owners looking to collaborate with other business owners for an epic Pokémon adventure (also known as very profitable event).  We added this to our list because we love the community involvement in events such as these and think it’s a natural IRL way to engage Pokémon users.  In our opinion, the sooner the better for events such as these as we are all taking bets in the office of when this hysteria will end.  (Max: 2 months, Min: next week.) 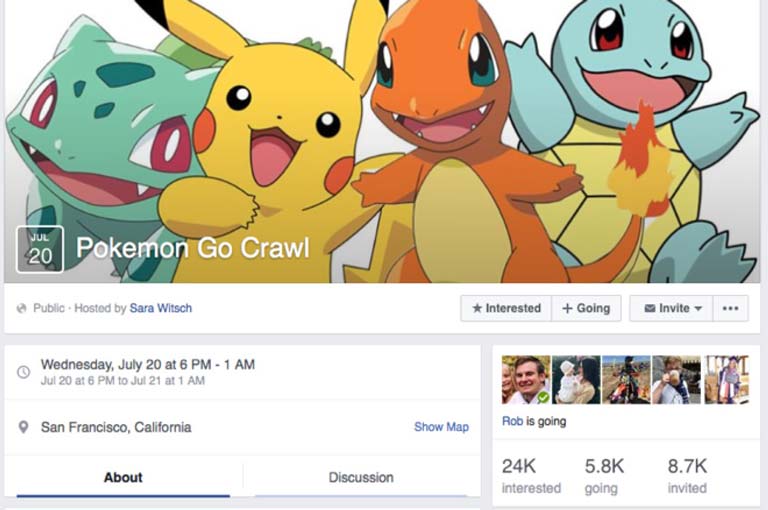 Have you seen any Pokémon marketing efforts you love?  Tag us in any you see on Instagram!  (@foundryideas)