So what if this year’s Addy Awards trophy looks like a cross between a shoehorn and a spatula. 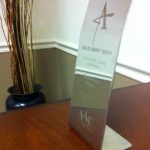 It’s still always cool to be recognized for your work, and this year is no exception.

Every year, the American Advertising Federation holds its prestigious Addy awards, which honors the country’s best creative work in advertising. It all starts with the local awards show, which was held on Friday, March 2, 2012 at Peppermill Reno’s The Edge nightclub (kudos to the Addy committee and Peppermill for upgrading the event to this much swankier venue).

We won gold in the Regional/National TV Spot category for this Reno-Tahoe Open/RTO Renegades spot.

We were also pleasantly surprised to receive the Sponsors Choice Award (presented by Yesco) for “Outdoor Campaign” for Ski Apache. A great nightcap to a great night.

Next up, our winning work advances to the Regional level awards show, where we’ll be competing against agencies in San Francisco, the Bay Area and the rest of northern California. Wish us luck!